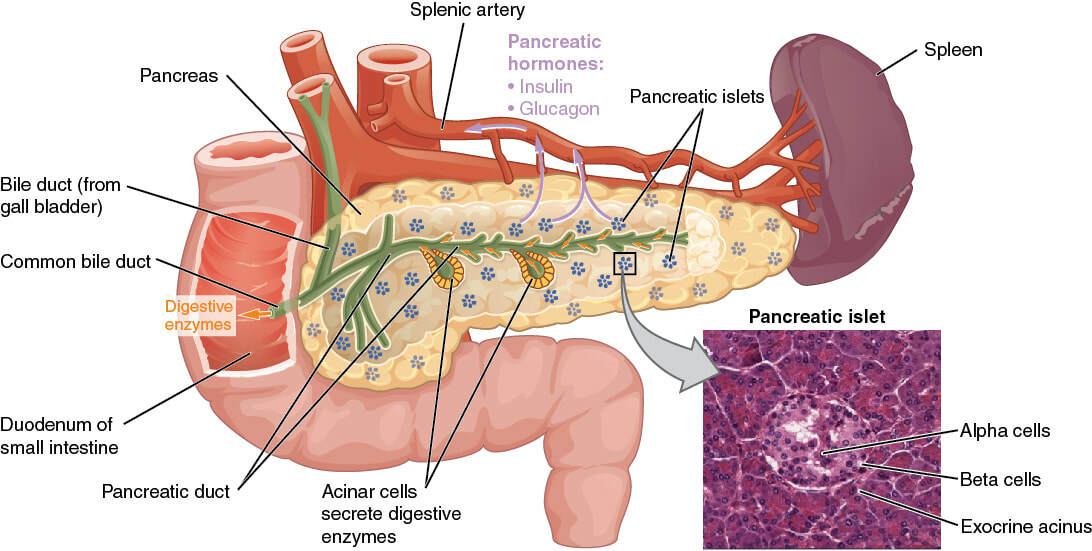 Diagram of the pancreas, and surrounding organs.
​"Where the hell is the pancreas, anyway?  I don't even know what the damn thing does beside give you cancer." -Hawk Hawkins (Tommy Lee Jones), Space Cowboys

OK, the pancreas is not exactly a high profile organ. We all have a pretty good idea of what our hearts do, and our lungs, etc. But what's the point of a pancreas? To answer Hawk's question, the pancreas is located just below your stomach, next to where the stomach connects to your intestines (labeled duodenum in the diagram, which is the first part of the intestine).

The pancreas performs two critical tasks.  It produces digestive enzymes that help break down the food you eat, and it regulates your blood sugar by secreting insulin. Most of the pancreas is devoted to the first task: making digestive enzymes. The enzymes are produced by cells called "acinar cells", which form little bags throughout the pancreas. The bags (acini) dump the enzymes into tubes called ducts, which act as conduits to move the pancreatic juice to the intestine. A series of larger and larger ducts eventually join into the "common bile duct", which connects with a gasket structure in the wall of the intestine called "Ampulla of Vater" (or just Ampulla). The acini and ducts together are called the "exocrine compartment" of the pancreas ("crine" meaning to secrete, and "exo" meaning outward).

Scattered throughout the pancreas, are little collections of cells called Islets of Langerhans. These cells are responsible for the other function of the pancreas, regulating insulin levels. Many people are familiar with insulin in the context of another disease, diabetes. In diabetes, the body's ability to properly regulate insulin is diminished, resulting in sugar levels that are either too low, or too high. Insulin is secreted by islet cells directly into the blood stream, which is why this portion of the pancreas is called the "endocrine compartment" of the pancreas (meaning "to secrete inward").

Both of these functions are very important, but it IS possible to live without a pancreas. If your pancreas fails from disease, or if it is removed surgically, you will lose the ability to make certain digestive enzymes, and you will become diabetic. Pancreatic enzyme supplements can be taken to manage the first problem. The second problem is managed like anyone else with diabetes, through careful monitoring of blood sugar levels and self-administration of insulin. Unfortunately, removing the pancreas of a patient with pancreatic cancer is not always possible (because the disease has already spread). Furthermore, even when the tumor has not spread, surgery is not usually an outright cure for the disease. For more on this, please see the page on pancreatic cancer surgery.